The exhibition entitled Constructing Europe is a presentation of almost 200 buildings chosen from among over 2,500 architectural structures nominated at thirteen editions of Mies van der Rohe Award

The thirteenth edition of the European Union Prize for Contemporary Architecture — Mies van der Rohe Award also marked the twenty-fifth anniversary of its establishment. A quarter of a century is quite a long time, particularly in the context of our increasingly dynamic reality. The organizer of the award, Barcelona-based Fundació Mies van der Rohe, decided to celebrate the anniversary by a special exhibition, which would present a possibly broad scope of architecture evaluated by experts and juries over this period. In 1988, when the first edition was announced, Eastern Europe was still communist, World Wide Web was no more than an idea, MoMA in New York showed an exhibition on Deconstructivist Architecture, and Ioh Ming Pei was completing his now-famous glass pyramid in the courtyard of the Louvre. Since then, architecture has been changing as rapidly as our civilization, professional media have discussed a multitude of subjects, numerous architectural stars have flared up and faded away, various fashions have appeared and disappeared.  The enlargement of the EU broadened the scope of the Mies Award, which assumed its current form in 2004, when ten new countries including Poland accessed the Union.

The exhibition entitled Constructing Europe is a presentation of almost 200 buildings chosen from among over 2,500 architectural structures nominated at  thirteen editions. The criteria of choice were not quite clear, but neither was the exhibition intended to be a presentation of an objective truth about  European architecture in the period 1988–2013. Recent editions of the award have been organized according to a multi-stage procedure —  nominees/shortlisted/finalists/winner — that had evolved in a rather complicated and complex way over the years.  Architects of the 34 structures, which made it to the short list this year were asked to present scale models of their works in a rigid format of 30x30x30cm (just like in several previous editions). These models were the core of the exhibition; the winning and other important buildings from earlier editions were shown by scale models, which did not adhere to the above-mentioned criteria, because they dated from the times when a search for the right formula of the Mies van der Rohe Award was still under way and nobody even thought about an exhibition that would sum up a quarter of a century. Our country has been an increasingly noticeable participant, so three recent Polish structures were presented: a wooden church in Tarnów near Puławy, designed by Beton practice and shortlisted in the previous Mies Award edition ("Architektura-murator" 6/2011), and two designs, which also made it to this select group this year: the Scientific Information Center and Academic Library in Katowice by HS99 ("Architektura-murator" 10/12), and the Integrated Train and Tram Stop in Wrocław by Maćków Pracownia Projektowa ("Architektura-murator" 3/2012).

The exhibition was not particularly enlightening to non-professionals; for professionals, who have followed the development of European architecture in the past 25 years, it turned out to be a challenging puzzle, which required recognizing particular, more or less known architectural structures by their models. The more a visitor knew about architecture, the more enjoyable the exhibition turned out to be. Because of their small dimensions, the models were not faithful miniatures of buildings, but their synthetic representations, simplified architectural volumes recalling small sculptures, made in various scales and of different materials. What’s more, in most cases the models did not show any urban context and did not give any detailed information about the building or its architects. All models were enclosed in identical transparent cases, and these put on various levels of modular tables in the form of pixelated, unrecognizable map of Europe; situation on the map corresponded to the real location of the building. The entire exhibition, very attractive due to its size and disciplined geometry, was located in a large and elegant hall of MNAC (Museu Nacional d’Art de Catalunya), quite close to the famous Mies Pavilion, where the major events were held, such as the prize-giving ceremony, a press conference and a general discussion on the condition of European architecture.

Naturally, the lack of urban context or more precise information about the presented buildings is hardly a reproof; the exhibition of almost 200 structures from nearly all parts of Europe in just one hall could not have told the history of them all. The exhibition was meant to prove, above all,  that contemporary architects still work on the architectural image of Europe, and the Mies van der Rohe Foundation has for some time attempted to systematize and award their efforts. Could the exhibition  have said something more, e.g. about the contemporary trends in architecture, or condition of practicing the profession? Could it have touched more general serious problems, such as spatial policy in cities or the fashionable topic of ecology? Surely not; nevertheless, it permitted to draw some general conclusions, regarding, for example, the standard of architecture in various countries. Anyway, the Constructing Europe exhibition is to visit several European cities (just as all exhibitions summing up individual editions did), and in this way it will promote European architecture and the Mies van der Rohe Award.
- Roman Rutkowski 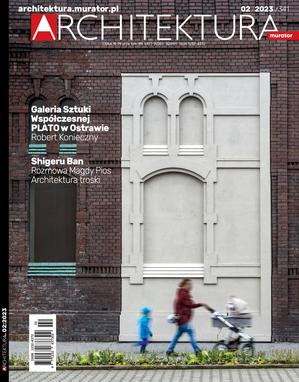 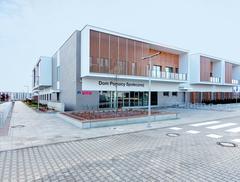 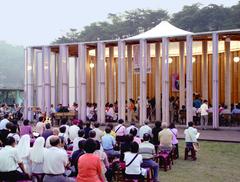 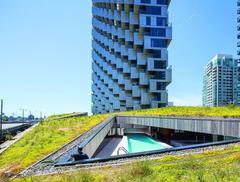